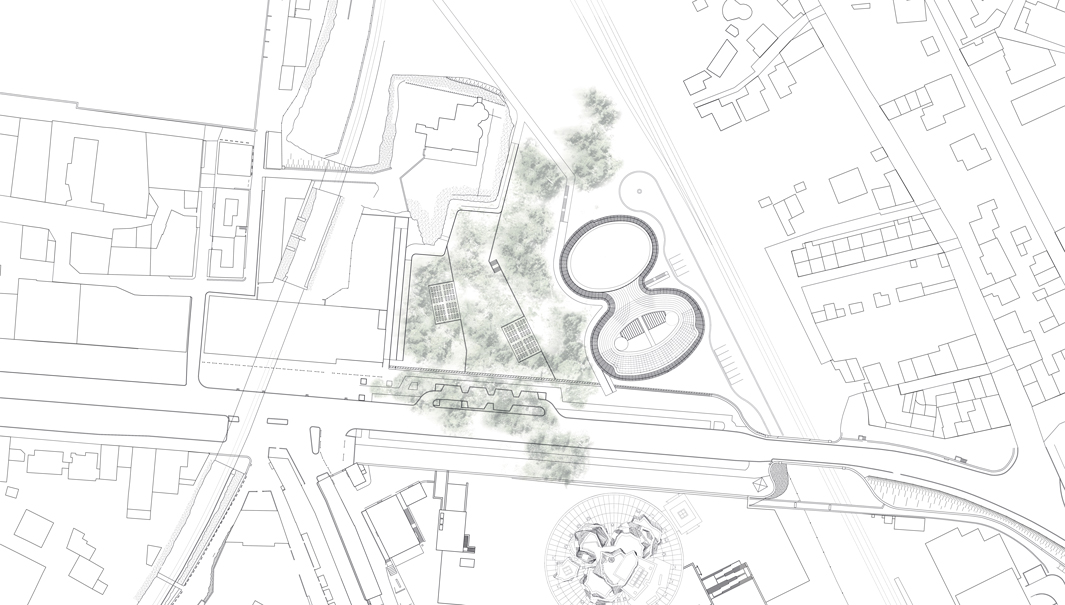 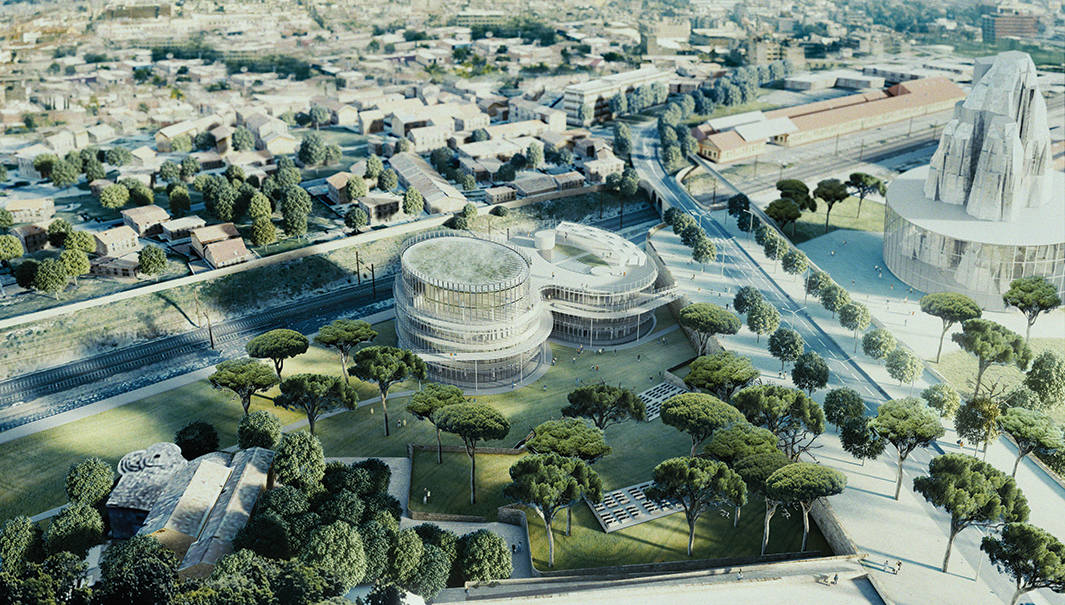 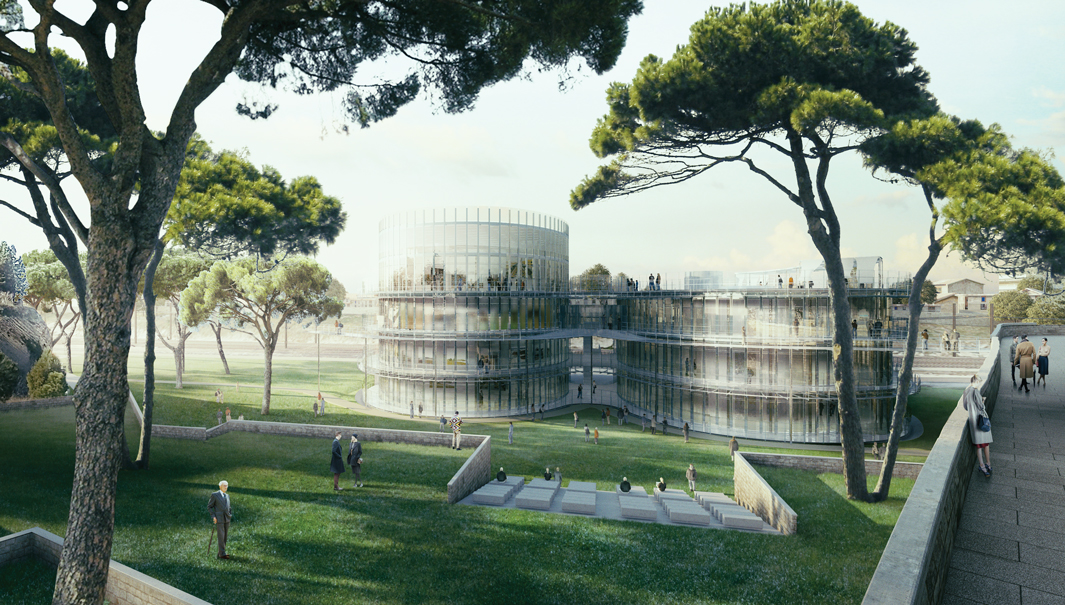 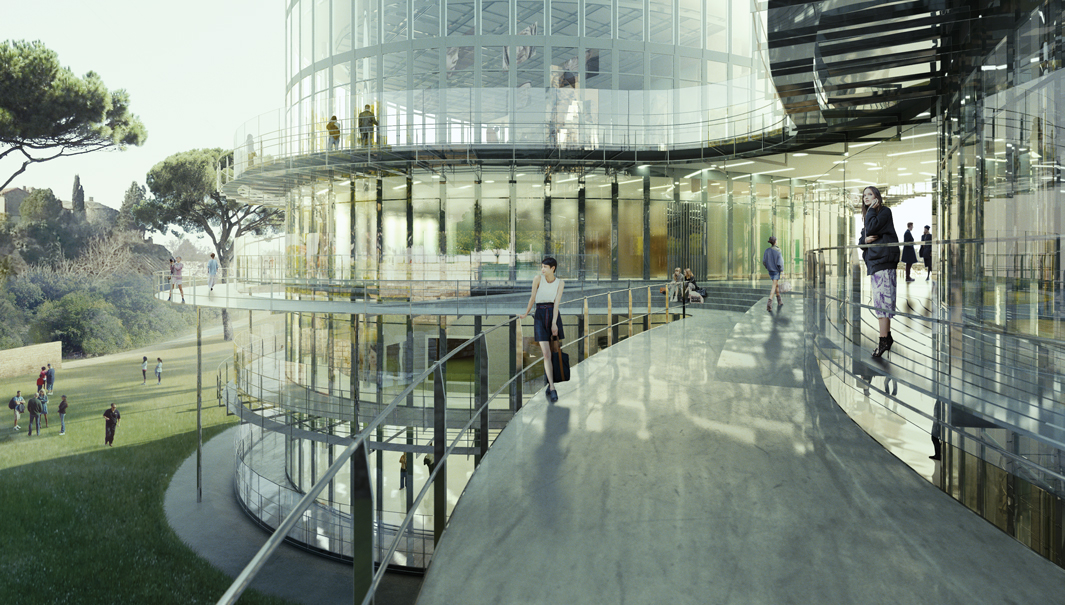 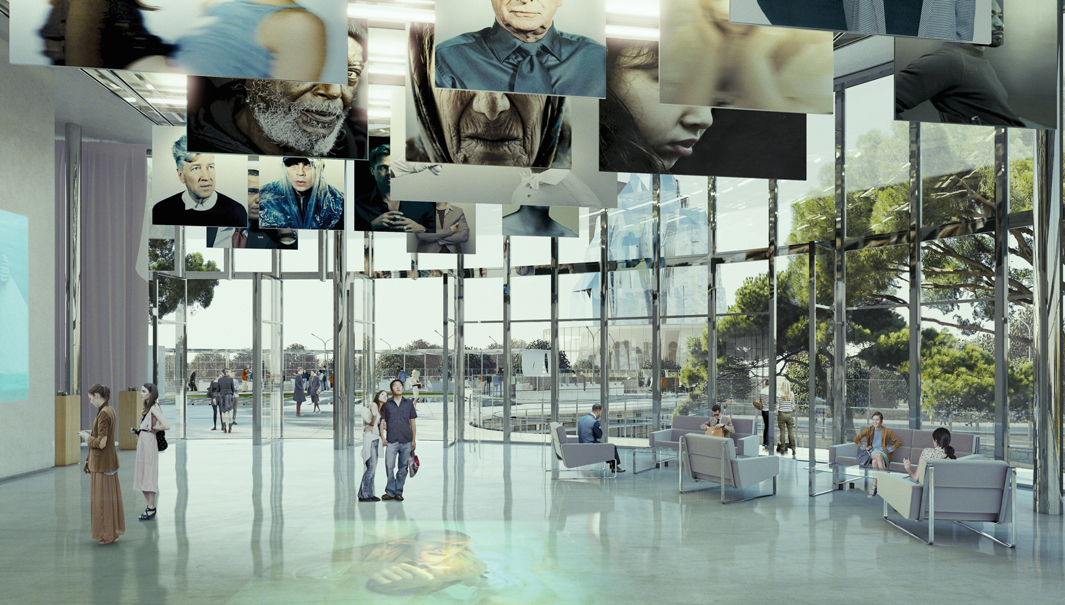 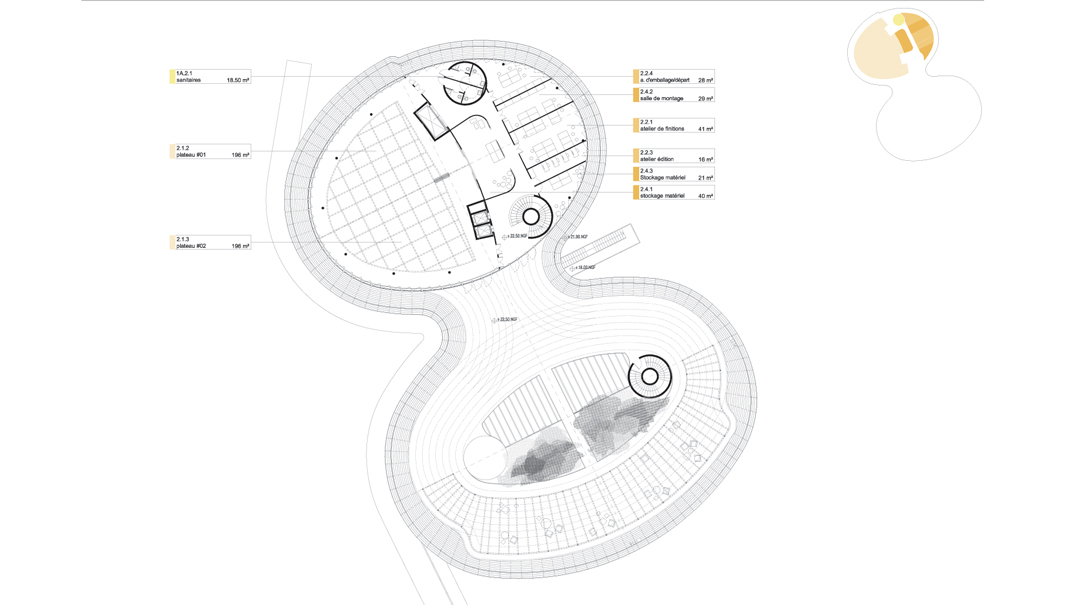 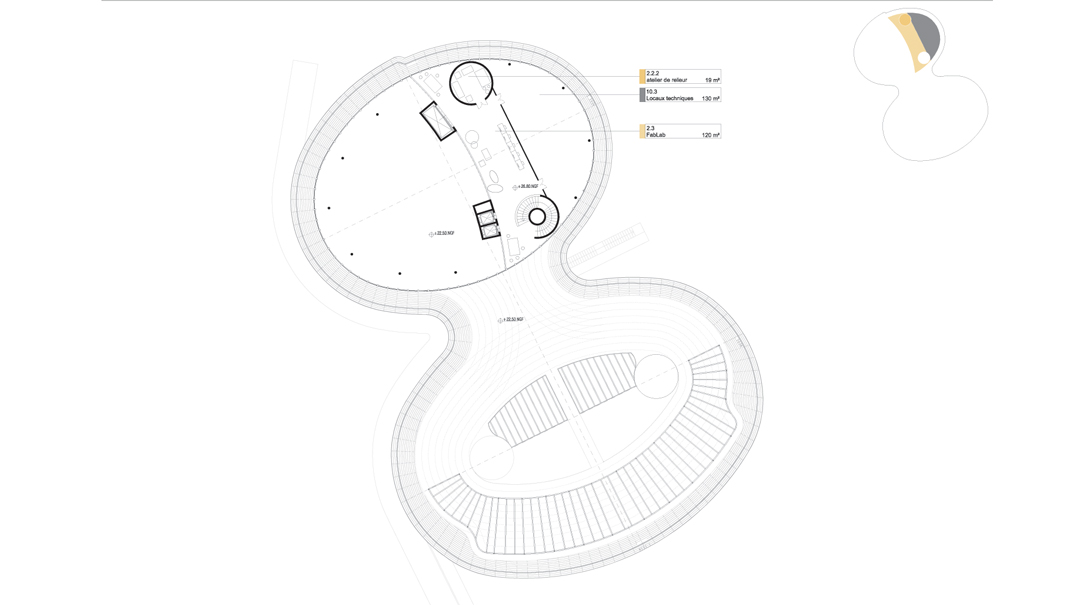 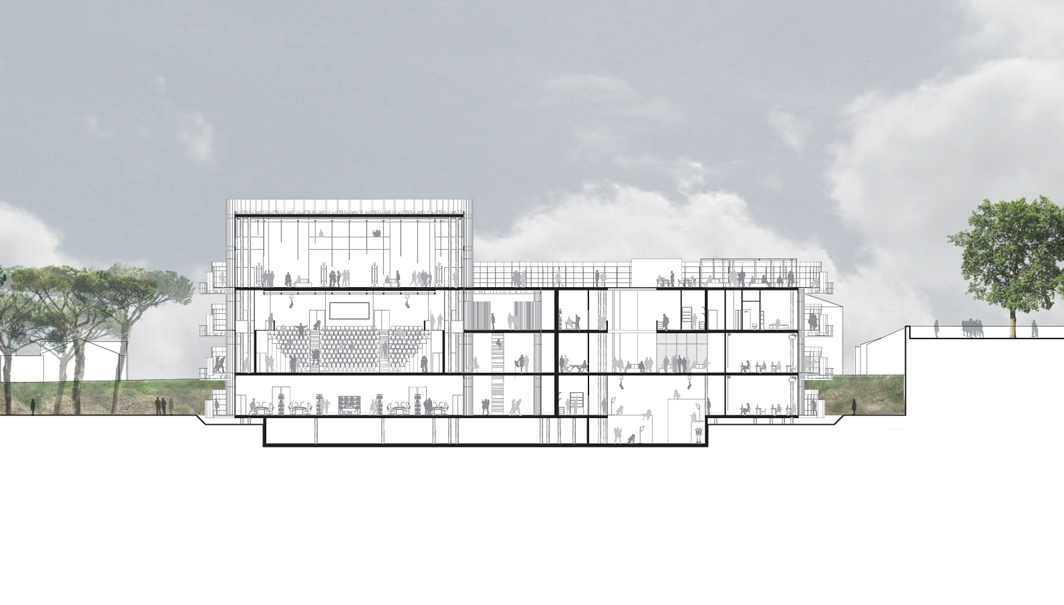 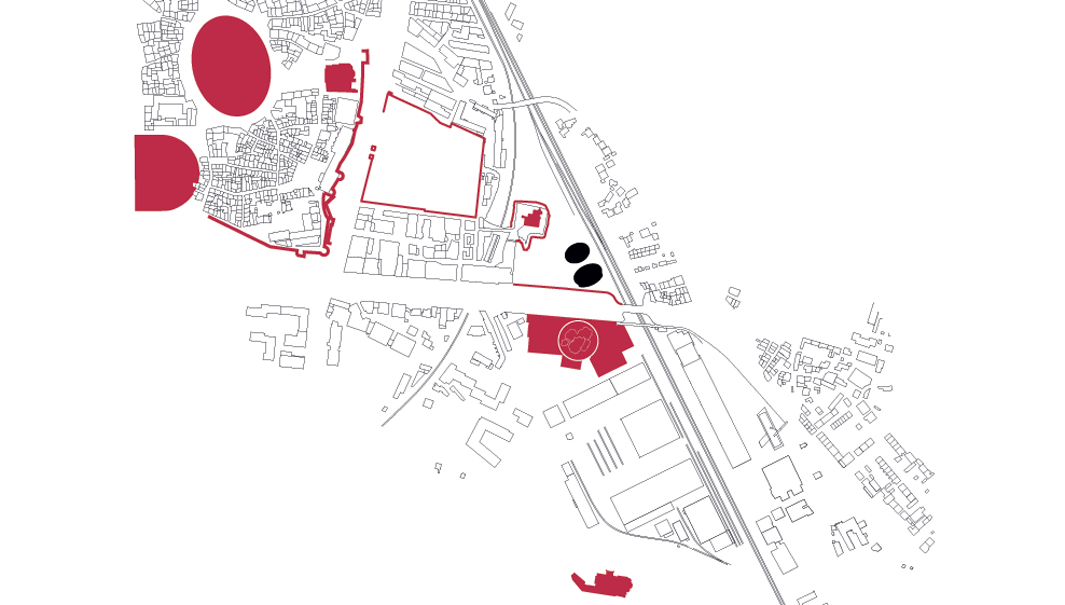 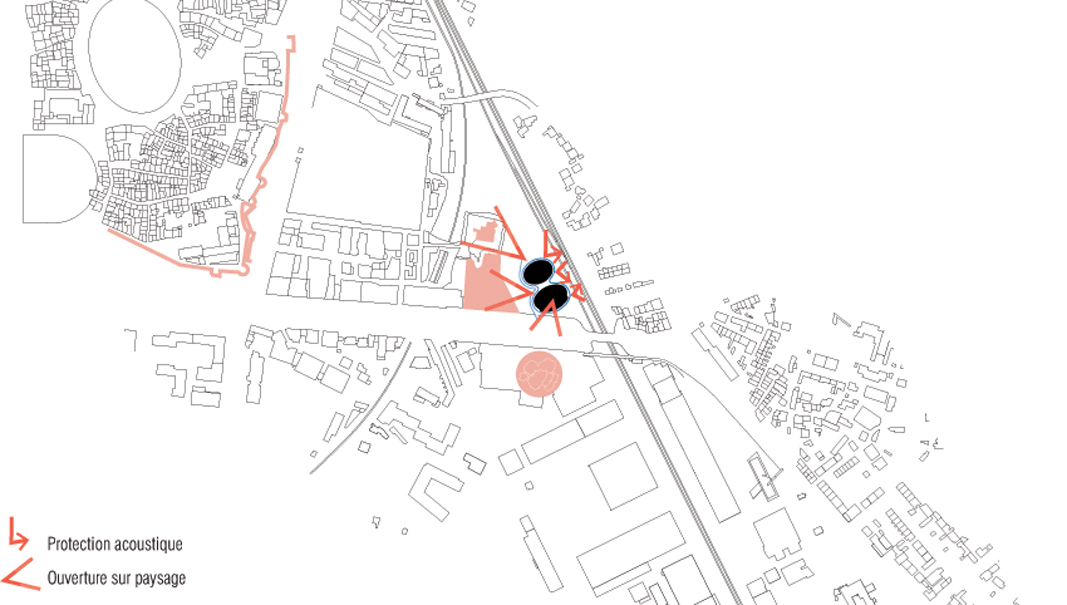 «The difficulty of this operation lies in designing a new landscape within the Luma Foundation’s perimeter, based on elements that are in opposition with one another and whose essences are as rich and expressive as they are extrovert and decided.»
Arles is a composite city, much like Rome, Venice or Seville: it is made up of areas of great historical value, that flank one another, divided by empty paved spaces and green areas: as the city draws everything together through multiple points of view. The key to transforming the site into something rare and new seems to be in establishing ‘direct co-visibility’ between the buildings and the garden.
A series of imaginary lines converge to form a triangle around the Foundation, the college and raised ground of Mouleyrès, at the centre of which is a garden of pine trees, bringing unity to the whole. From there the lines extend along the avenue and railway to the Luma Laboratories and the historic city centre. The building parts will be constructed with two, three or more points of view (there are six views: towards the Foundation, the Mouleyrès hillock, the school, the garden, the avenue and the railway). The phenomenon produces an effect of superimposition or double image, a well known in photographic technique, creating an urban model made up of superimposed and multiple exposures; the result being imagined rather than planned. Indeed, it is more a question of impression (in the ‘impressionistic’ sense of the term) than reasoning.
The surrealists, who used the double image as a means of expression, maintained that if photography was the art that freezes reality, on the contrary the double image opened the way to experimentation and to a superior reality of all forms of association that until then had been neglected. Our proposal is founded on transposing this photographic technique with its starting points and applications, onto the site and the project.
The National College of Photography in Arles is definitively made up of two oval-shaped constructions of slightly different dimensions. Together they form one structure on the plot, near the railway, open towards the west over a garden of tall trees. Although the two oval elements are separate from a constructional point of view, they are linked to each other on each floor by gangways whose height varies according to position and function. This light, slender and fluid architectonic linking element is intended for students to use as a natural external extension to their classrooms and spaces of activity, as well as for cleaning and building maintenance. Added to which, it will make access to the school flow more easily (on a level with the Avenue); and lastly it provides solar protection for internal spaces, with the depth of the gangways varying with respect to their orientation.
The idea behind this project is to produce, without the slightest thermal disturbance, a light and contemporary construction that lets the light in, and gives Arles a prestigious and elegant architectural work that fits into the character of the mass of the Mouleyrès, and the even higher and larger Luma Foundation.
What better solution is there than to use light? In this proposal, the basic element of photography, light, is the stimulus for a project that intertwines the history of a city as particular as Arles with some of its most important modern assets: its ruins (sarcophagi) with the infrastructure (the railway) and major arteries (the avenue).
It is a question of rendering the site free of any false move that would accrue from hurried choices to offer Arles the best current views and perspectives for the practice of photograph.